Cher – The Shoop Shoop Song (It’s In His Kiss) 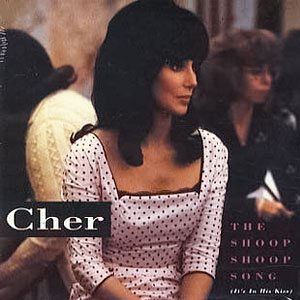 Cher – The Shoop Shoop Song (It’s In His Kiss) – Official Music Video
The song was written by American songwriter Rudy Clark and originally released by Merry Clayton in 1963. Cher’s cover was written for the original soundtrack for the Richard Benjamin’s 1990 film “Mermaids” (starring Cher, Bob Hoskins, and Winona Ryder). The single was released in November 1990 with “Love on a Rooftop” on the B-side. “The Shoop Shoop Song” hit number 1 spot on the singles charts in many countries, incl. the UK, Austria, Israel, and European Hot 100 Singles chart. The song also appears on Cher’s (born Cherilyn Sarkisian) twentieth studio album, “Love Hurts”.
“The Shoop Shoop Song (It’s In His Kiss)” was covered by many artists, including Ramona King (1964), Linda Lewis (1975), and Linda Ronstadt (1979)

Cher – The Shoop Shoop Song (It’s In His Kiss) – Lyrics