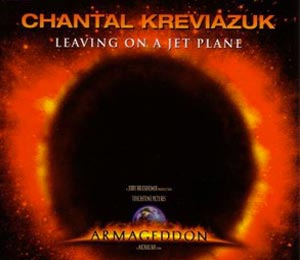 Chantal Kreviazuk – Leaving On A Jet Plane – Official Music Video
The song was written by American singer John Denver in 1966. The most popular version was released by Peter, Paul and Mary in 1966 topping the singles charts in the United States and Canada.
The cover by Canadian singer Chantal Jennifer Kreviazuk was released in February 1999 as the single from the original soundtrack to the 1998 movie “Armageddon” (starring Bruce Willis, Billy Bob Thornton, Liv Tyler, and Ben Affleck). The single peaked at #59 in the UK.

Read “Leaving On A Jet Plane” by Chantal Kreviazuk on Genius